Every morning Maddie and Macey Council get up early and head to Wimauma, where they are raising two farm animals to show and sell. They also go back in the afternoon, spending a total of about four hours a day with their charges.
Part of the pioneering Council family of cattle ranchers and dirt farmers, the sisters are members of Lennard High School’s FFA chapter.

LOIS KINDLE PHOTO
Another of Maddy Council’s daily responsibilities in raising Gunner is brushing his coat. His appearance is important. The steer will be considered next year at the Florida Strawberry Festival for his degree of muscling, degree of finish (fat cover), growth capacity, structural correctness, balance and frame size, all of which will determine how he and the price per pound Maddy will earn from his sale.

This year, 17-year-old Maddie, a senior, is raising a Charolais-cross steer named Gunner and 14-year-old Macey, a freshman, a Hampshire-cross pig named Judy.
“This is Macey’s first year in FFA,” Maddy said, adding she’s taken her younger sister under her wing and is showing her the ropes of animal husbandry. “We’re doing this for the experience of raising livestock and to raise money for college.”
Maddy plans to attend the University of Florida, major in animal science and minor in ranch management. She’s given some thought into becoming a large animal veterinarian and wants someday to own a herd of cattle.
While Maddy’s too young to know for sure what she will do with her life, she’s also thinking about becoming a large animal vet. She said she thoroughly enjoys raising her pig, a process which Maddy guides her through.
“I’ve been showing my friends’ animals for about a year now (a heifer and a bull),” she said. “And I’ve been working with Judy since I got her almost four months ago.” 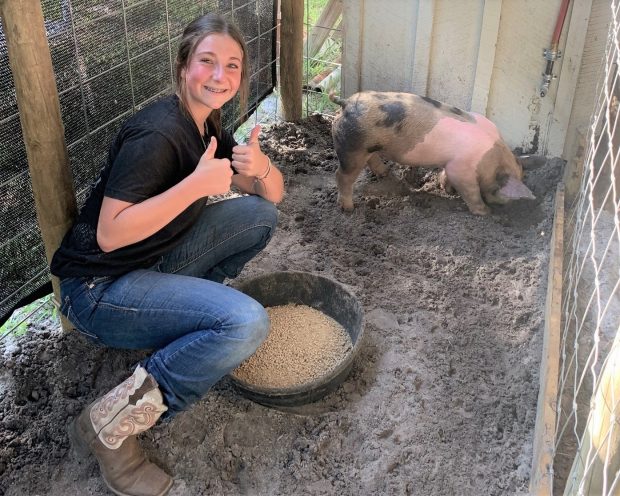 MADDY COUNCIL PHOTO
Macey Council is shown here with her newly purchased 66-pound, Hampshire-cross pig, Judy, for whom she paid $350. By the time she shows Judy at the Hillsborough County Fair this fall, the young porker will weigh about 250 pounds.

While Gunner and Judy receive exceptional care, they’re not pets. after all the feeding, cleaning, walking and training both animals receive, they’ll be shown at fairs or festivals, sold and humanely slaughtered or butchered for food.
“Although you get attached to them, this is part of the livestock business,” Maddy said. “It’s always sad to let them go, but going in we know what the outcome will be. While they’re here, though, they have a very good life.”
Both animals were purchased from breeders. Maddy spent $1,500 on Gunner and Macy, $350 on Judy. Currently, the 10-month-old steer weighs about 650 pounds, and by the time Maddie shows him at next year’s Florida Strawberry Festival, he’ll have gained another 550 to 600. Before then, Gunner will be shown at the Hillsborough County Fair and various Jackpot Shows.
Judy, on the other hand, now has gone from 66 pounds to 110. When’s she’s shown and sold at the Hillsborough County Fair this fall, she’ll weigh about 250 or so. 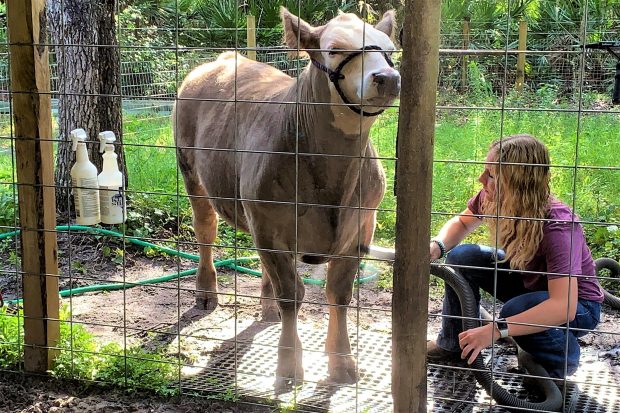 LOIS KINDLE PHOTO
Keeping an animal clean and groomed is an essential part of raising one for show. Here, Maddy Council dries her steer Gunner’s legs after his morning shower. She and her sister Macey spend four hours daily taking care of their animals, visiting them in the morning and afternoon seven days a week

“The girls are really into this,” said their mother, Robin Council, of Ruskin. “It’s teaching them to care for a large animal, which is a big responsibility. They have to learn to market and promote their animals, keep record books (including details of their care, their expenses, the animal’s health records and photos) and, finally, sell them.
“It’s exciting for them, she added. “They’re taking it to heart and investing a lot of time and energy to raise and care for their animals.”
Maddy and Macey’s FFA advisor, Lauren Van Dame, agrees.
“They’re really good girls,” she said. “Maddie makes animal husbandry one of her top priorities,” adding that the teenager has raised three animals so far. “We’re excited to have Macey join us this year. She and Maddy will be a sister duo, and I’m looking forward to see how they do.” 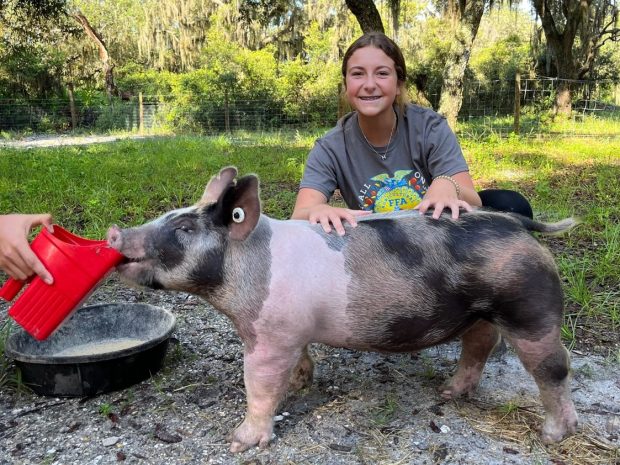 MADDY COUNCIL PHOTO
Macey Council is shown here with Judy, her Hampshire-cross pig. Although the Lennard High School freshman is new to raising a large animal, she’s by no means unfamiliar with them. She helped friends show a heifer and a bull last year. 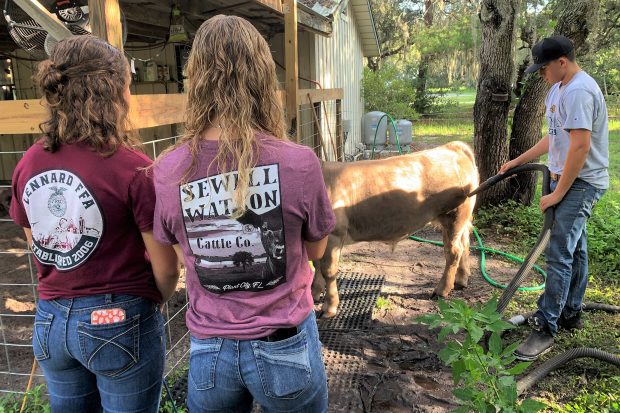 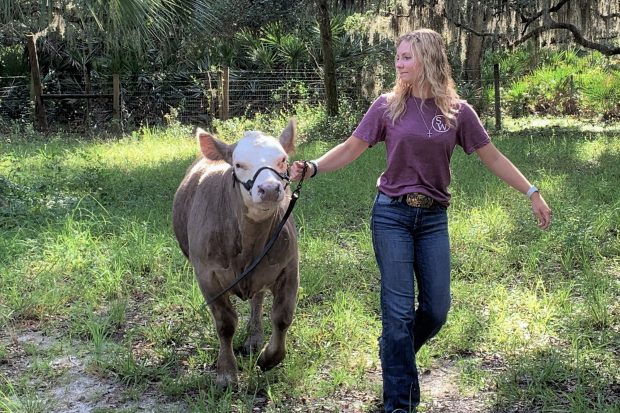 LOIS KINDLE PHOTO
Maddy Council leads Gunner, seen here wearing his harness, around the property her grandmother Sonja once owned. Walking the animal is essential to getting it used to eventually being led around a festival or fair arena. 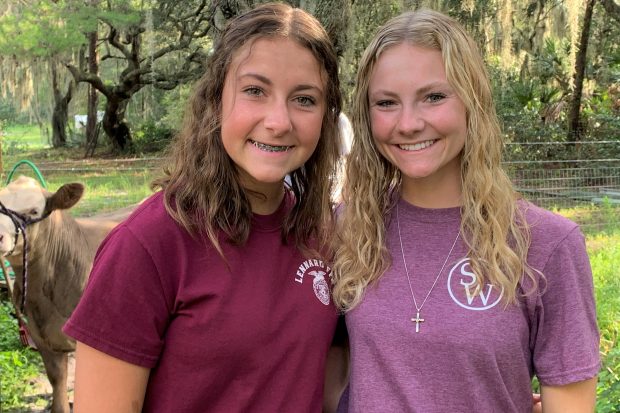 LOIS KINDLE PHOTO
Macey Council, 14, and her sister Maddy, 17, are part of the area’s pioneering Council family of cattle ranchers and dirt farmers and also members of Lennard High School’s FFA chapter. The girls both raise livestock to show, sell and raise money for their college educations.