Summer Inhale. Panfish will take foam flies that hit the surface with a smack. Cast a fly line with a little extra effort to turn the offering over with some force to catch their attention. Simonson Photo.

The summers of my junior high school years were memorable ones, punctuated with week-long trips at the lake cabin spent with cousins, classmates and friends from the small houses that lined the sandy shores. Among all the boats we held – paddle races, sand fights, pick-up football games that spanned the front lawns of four cabins – those where we threw ourselves to the mercy of gravity and surface tension in our efforts to make the best belly flops were the most memorable. On more than one occasion, I left such a competition with a chest and stomach redder than the sunburned portions of my extremities. The resounding smack made upon impact in those days echoes in my memories.

Just as the slap of my youthful flab against the water reminds me of summer, the same surface sound should also serve as a reminder that fish this time of year are aggressive and many times looking up for their next meal. Whether panfish or trout on the fly rod, smallmouth bass on actively worked surface bait, or largemouth lurking along the lily pad fields waiting for an unassuming frog to hit the water, many summertime offerings should consider ringing the dinner bell with a similar sound. What follows are tips for converting summertime’s surface-focused fish with strategies for some popular topwater offerings.

When fishing with surface flies or lures, maximizing the impact is often key in generating the cues that food items of all sizes make when they land on the water. From grasshoppers and crickets to frogs and even mulberries which carp will consume from overhanging bushes, those offerings that land with a smack, a plop or other resounding impact trigger a rush to figure out just how edible the latest item is. With foam flies, such as spiders and hoppers, and small floating crankbaits in patterns such as life like grasshoppers, frogs and cicadas, placing casts in a manner which causes a greater splash can draw fish in for a look. Casting flies a bit harder and putting a little more arch under standard lures will ensure they land with the hit that will grab the fishes’ attention.

However, that splash might also startle some panfish or bass located immediately below the site of impact or may just barely catch the attention of a far-off fish that needs some time to come in for a look. A good rule of thumb before working in the kicking, twitching, or sliding motion of a topwater lure in a retrieve back to the boat is to wait until the ripples from the bait’s landing have dissolved. Sometimes the strike will come while the circles are fading out, other times it’ll happen on the first move of the offering, after the fish have had a chance to move out and come back or make the trek over from their initial spot. If a fish doesn’t engulf the bait right away, give it a second or two after things have calmed down before starting a retrieve to maximize takes.

Perhaps the hardest part of fishing lures on the surface is overriding the adrenaline rush that comes with a take up top. The water explodes with a swirl and a boil, especially with bigger bass, and while it may seem that a weightless tube, Scum Frog, or surface stick is gone, oftentimes those hooks are not quite in position for a good hookset. A good rule of thumb is to count to two before powering back on the rod to set the hook, enforce the fish has a hold of the bait and a connection can be made. If the weight of the fish is evident sooner, short circuit the count and go ahead and lean into it. Setting the hook too fast, however, can have a whole bunch of hooks coming back in the direction of the boat at light speed. Feel for the fish, or pause and count it out, using each experience to learn how to override the rush that comes with a topwater explosion.

Remember too, when fishing lures such as Texas-rigged plastics, frog patterns designed to work through the sloppy mats of weeds, lilies and other surface clutter, or those large deer-hair poppers on the fly rod, that a forceful hookset is in order to push the point of the hook through the plastic or a monofilament hook guard and into the mouth of a bass. It’s not the snap of the wrist used for summer crappies, or the slow drag of a sweep for walleyes on a bottom bouncer, it’s an All-Star Game Home Run Derby type of swing that powers the point home, so give it all you’ got and all that your rod can handle. In the end, the force also transfers into the act of pulling the fish out of any shallow weeds beneath the surface and bringing the fight into more open water for a better chance of landing it.

This summer, add some splat to the surface and call in hungry fish for some great topwater action. Knowing how to work this boundary between the steamy air of the late season and the aquatic world below may not always result in more bites, but it certainly helps convert some of the most exciting strikes into awesome angling memories. Make some noise, let things settle down, and respond accordingly when a fish blows up the of the summer surface this season. 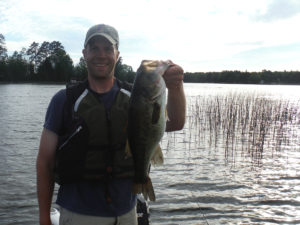 Up Top. Largemouth bass will take surface baits worked around shallow structure, vegetation and reed beds. From weightless Texas-rigged plastics and frog patterns to poppers and walk-the-dog-style lures, giving them a second to lock onto the bait is key in getting a good hookset. Simonson Photo.

Nick Simonson is the lead writer and editor of Dakota Edge Outdoors.