BENTONVILLE — New school bus safety technology will make it easier for parents to keep track of their kids and help bus drivers focus on the road.

School Board members approved a contract in March with Transportant, based in Lexena, Kan. The technology cost $591,190 to install on the district’s 161 school buses, followed by an annual fee of $96,000, according to a board memo.

The new technology will improve safety in the fast growing district, Salmons said. The number of students who ride the bus increased from 9,000 at the beginning of last school year to 12,700 at the end of the year, he said.

In previous years, bus drivers followed printed route sheets with lists of directions, stops and students, Salmons said. Drivers now will have a screen on the dashboard that provides turn-by-turn directions to stops, he said. When the bus stops, the screen will provide a list of students who are supposed to get on and off, complete with photos.

Students will use their school identification cards to scan on and off the bus, Salmons said. Parents will get notifications on a smart phone app when the bus is on its way and when their child gets on and off, he said.

“Parents will have a much better understanding of where their students are,” he said.

Previous systems offered cameras, but each bus required a hard drive to store video footage that had to be downloaded and reviewed, Salmons said. The new camera system provides live video inside and outside the bus, which is uploaded directly to the cloud, making it easier for administrators to find clips of incidents, he said.

Allison Teters, who has three children in the School District, said it will be nice to know when kids get on and off the bus. Last year her two youngest sons rode the same bus, but this year one of her kids is moving up to middle school and they will be on different buses.

“It’s definitely reassuring, knowing I know where he’s at and that he’s not in a car line thinking I’m picking him up or trying to walk home with a friend,” she said.

The new technology will allow drivers to do their jobs more safely and efficiently, said route coordinator Kristen Callaway, who frequently substitutes as a bus driver.

Substitute drivers don’t know all the children on their bus and aren’t familiar with all turns on their route, Callaway said. The system will help drivers make sure kids get on and off the bus at the right stop, she said.

“As a sub driver, having an illuminated map with turn-by-turn directions is going to be huge,” Callaway said. “I’m not going to have to look at a paper copy in the dark and figure out where I’m going next. It’s going to be much easier.”

The technology is user friendly and will be easy for drivers to learn, she said.

Bentonville is the first district in the state to use Transportant, Salmons said. The technology will be installed on all buses in the coming weeks, he said. Students will begin using their ID badges to scan on and off the bus when school starts Aug. 15 and the parent app will be launched in October, he said.

Map coordinates are shown on Transportant, Thursday, July 21, 2022 on a school bus in Bentonville. Bentonville Schools hosted a tour of their new bus safety system Transportant for members of the media. Visit nwaonline.com/220722Daily/ for today’s photo gallery. (NWA Democrat-Gazette/Charlie Kaijo) 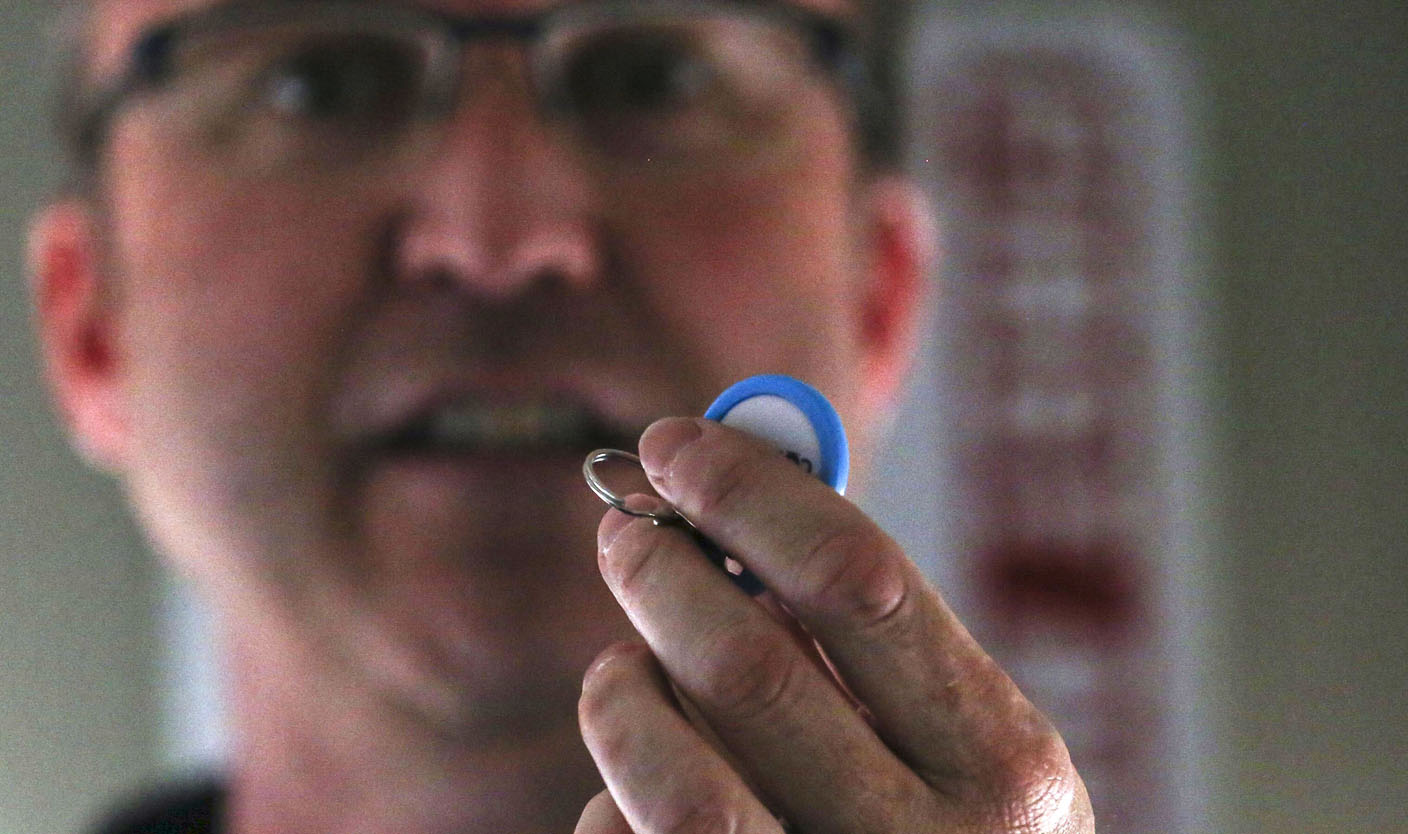 Jason Salmons, director of transportation, holds up a key fob kids will use to board their school bus, Thursday, July 21, 2022 during a media tour on a school bus in Bentonville. Bentonville Schools hosted a tour of their new bus safety system Transportant for members of the media. Visit nwaonline.com/220722Daily/ for today’s photo gallery. (NWA Democrat-Gazette/Charlie Kaijo)